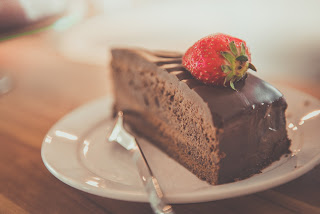 As he walked away, Alison stubbed out her cigarette and stifled another laugh. "What is he on?" she said, nodding her head in the direction the waiter had gone.
"You know," said Rose, "I’ve had this really strange feeling that losing Yankee was bound to happen." Alison looked at her expectantly.
"I mean, it seems as if all the males in my life have deserted me, I guess the dog is next."
Alison burst out laughing. "The dog is the only one you did right with, you got him fixed."
Rose started to choke on a mouthful of Death by Chocolate. Dark crumbs flew everywhere, as she gasped for breath - tears running down her face. She pounded on the table unable to breath. The waiter came running over, yanked her out of the booth and clamped his arms around her stomach.
"OK! OK!" panted Rose. "I’m OK!" The entire restaurant full of people was looking at them.
"I saved your life!" the waiter shouted. His fellow servers crowded around and clapped him on the back. Rose picked her napkin up and tried to clean the chocolate mess off her clothes. Alison was also holding her napkin - up over her face. Finally she peeked over a corner and giggled.
"Now that is what I call a dramatic exit!" she said. "And its time to make ours."
The two women walked out, leaving a generous tip and a chocolate mess. They hugged each other goodnight in the parking lot and drove home, smiling. Once you survive Death by Chocolate, you can survive anything.
Posted by Noreen at 8:20 PM