US1 Summer Fiction Issue: Never Give a Server an Even Break 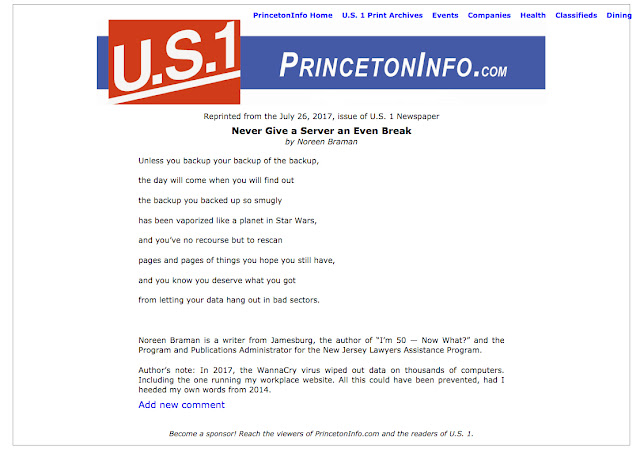 See the entire US1 Summer Fiction Issue
Posted by Noreen at 2:13 PM No comments:

Posted by Noreen at 5:28 PM No comments:

This weekend we face the sorrowful serious illness of Zelda, the 16-year-old dog who has been with me, my kids, and the Love of My Life through many of life's adventures. Stories and poems about her have appeared in my book and my blogs, and she has her own loving group of fans. As we go through this very difficult time that is inevitable for any pet parent, I'd like to share one of the stories about Zelda and the other dogs who have shared my life. All brought me joy, happiness, and at times, crazy adventures. This dog tale appears both in my book "Treading Water" and in "Dogs: Heart-warming, soul-stirring stories of our Canine Companions," edited by John Cali.

Foot Follies – Week 8 Can a broken foot affect the brain?

Studying the brain is very stylish these days. What was once thought by ancient Egyptian embalmers as a spongy, useless skull filler has now become the favored organ to poke, prod, scan, and monitor. A quick search of the internet (and you know if you see it on the internet, it is true) reveals places such as the University of Texas seeking subjects for the following important brain studies:

Recent studies have looked at why people are so resistant when their political views are challenged, the effects of diabetes and weight on brain function, and one that states that a sleep-deprived brain will actually eat itself. There are so many brain studies that Forbes Magazine actually selects at top 10 each year. And there are some pretty interesting ones covered over the years.


So, it is not so far-fetched that this eight week broken bone journey may include some effects on my brain. Effects that have led me to do things, like, say, forgetting to put the filter basket back into the Mr. Coffee and plopping the paper filter and coffee grounds into the empty compartment, starting the coffee maker, leaving the kitchen, and coming back to find a flood of French vanilla coffee spilling into cabinet drawers and onto the floor. Little things like that, not anything that might start pointing to any kind of other brain problem, just stuff caused by a broken bone.

There is the rare possibility of a fat embolism from a broken bone, but that is going to happen right away. According to the Mayo Clinic, a fat embolism in the brain can cause symptoms that range from “drowsiness, to seizures, to coma.” It doesn’t say anything about “stupid mistakes.” (Although, that “drowsiness” part is pretty tempting.) But at eight weeks out, I have to cross fat embolism off the list.

There is a study that says a broken heart can actually hurt like a broken bone, but that doesn’t apply. There is a song called “Brain Dead” by a group called Broken Bones, but the sad and scary lyrics about a person on life support thankfully don’t apply here either.

There is a great article in Science News from June 2017 indicating that there is really a bone/brain communication connection. Previously thought of as “dead” matter, bones turn out to be dynamic machines, pumping out new cells, and releasing hormones that communicate with the brain about quite a few things. Included are, appetite, energy level, blood sugar, and — wait — “memory and mood.”  BINGO!


The science is very new, has only been done in mice (see my previous articles about mice and rats) and “researchers are finding new ways these hormones might work.”


Science fan that I am, this news is enough for me to extrapolate a theory that bones that release important hormones to the brain could actually suffer an interruption in that process if a bone is broken. And I can further theorize that possibly, the Fifth Metatarsal is the bone that controls most of the “memory and mood” hormones. Combine that broken bone with my recent recurrence of thyroid hormone troubles (the thyroid being the body’s hormone thermostat) and I conclude that I just might be suffering broken bone induced memory loss. If this is not an official diagnosis yet, medical researchers can feel free to quote me. Braman's Syndrome is not yet taken by any other condition as far as I know. I will happily volunteer for the "This is your brain. This is your brain on a broken foot" PSA.

So, leaving the lovely card for yesterday’s bride and groom in the car at home wasn’t really my fault. The French vanilla coffee flood this morning was actually a medical issue, as well as the keys left in the door, the cell phone that is never where I left it and all the other assorted brain freezes of the past eight weeks. It is all the fault of my broken foot! The broken foot that I took to the doctor at 10 AM this morning for x-rays. Unfortunately, my appointment was for 3 PM.

and PS: kudos to all who discovered that the Broken Bone Effect affected my grammar.
Posted by Noreen at 1:16 PM No comments: 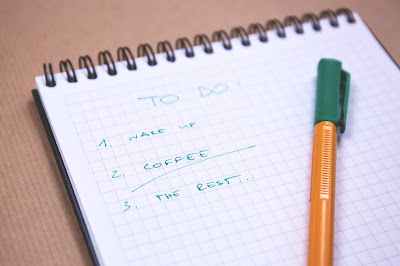 Caring for an elderly dog
mobility impaired
Half blind
two weak legs
digestive issues
and incontinent
we mirror each other in our inactivity.

Wonder about the family
whispering  “here comes the trouble fairy”
I’m also sick of listening to myself
so writing them down
the litany of complaints
to get them out of my head
and make room for something productive.

Have a complaint litany of your own? Make a list, with each complaint on its own line.  Then, read each line out loud, and at the end of the line, say HA HA HA, next line say, HO HO HO, next line, HEE HEE HEE, and repeat to the end. When you are done, take a deep breath smile, then laugh. Start off with pretend laughter and see if you can break into real hearty laughter. No worries, even the pretend laughter tells your brain to release endorphins which help you feel better. Still feeling lethargic or anxious? Try a little mindful breathing. Below is a poem to help you with that, alternate breathing in and out deeply with each line.  I'm doing this with you! We can lift our spirits and forge ahead! 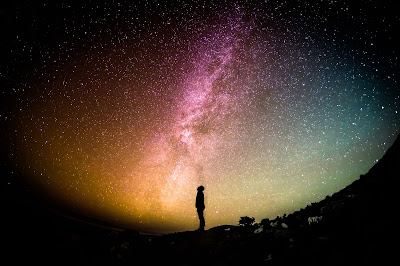 breathe in calm
breathe out fear
smile: even if you don't feel like it.
release the anxiety

breathe in healing
breathe out pain
smile: with your lips and eyes.
release the worry

breathe in happiness
breathe out catastrophes
smile: feel love in your life
release the sorrow

Posted by Noreen at 1:07 PM No comments: