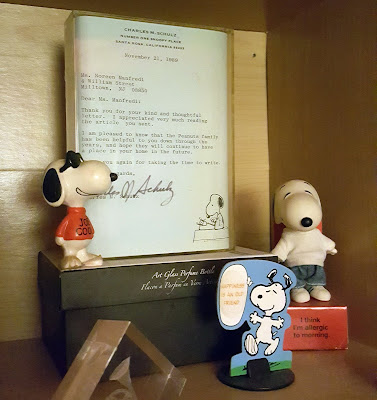 In 1989 I wrote a short article for a tiny publication about being thankful. My article, “Why I am Grateful for Charlie Brown” detailed how I had carried around a tiny book of Peanuts comic strips entitled “Everything I Do Makes Me Feel Guilty.” I thanked Charles M. Schulz for creating in Peanuts, an assembly of characters that not only entertained me, but spoke to my troubled teenage years as well as my (at that time) young motherhood.


I treasure the letter I received in return, and his wish for me: “I am pleased to know that the Peanuts family has been helpful to you down through the years, and hope they will continue to have a place in your home in the future.” Those who know me, know how true those words were, and still are, to this day, 40 years later.


This weekend I will be traveling to the Midwest, to be with my son, his wife, and their children, to provides support and love as their youngest undergoes brain surgery. There was no doubt what I would bring with me for this baby full of smiles and laughter — a Peanuts gift. The choice was apparent the moment I saw it, a stuffed Astrobeagle commemorating Snoopy’s role as NASA’s safety mascot. Astronauts and ground crew would even “beep” Snoopy’s nose for luck, and carry a silver Astrobeagle medal on their journey, to be gifted to a special ground crew person on the return. I’ll be carrying the stuffed Astrobeagle on the plane and on the train, asking strangers to pose with him and smile, so he can bring all their good vibes to the one who needs them most next week.


And while I am at it, I’d like to thank Charles M. Schulz again – he probably never realized how his words would come true like this – that Peanuts has had a place in my home and my heart in all the intervening years since his letter.


And so, I posthumously award Charles M. Schulz a Smile Starter Award for all the smiles he has brought to the world. I know, somewhere in the great beyond, he is beeping Snoopy’s nose for all of us. 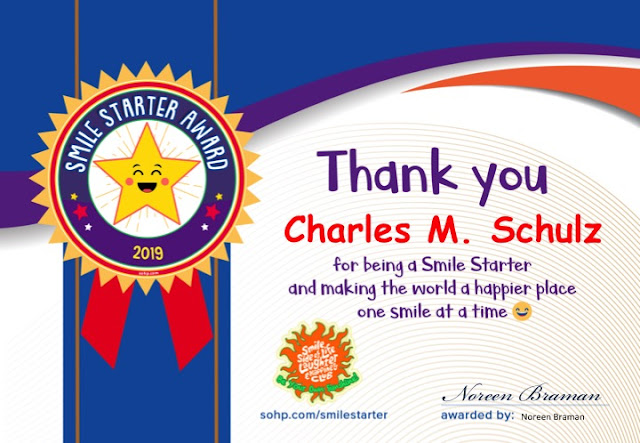 I opened up the plastic frame with my Schulz letter in it, and found ANOTHER LETTER, from 1991 - in this letter he says "When a person sits in a room by himself day after day trying to draw something funny, and sometimes meaningful, he has no idea as to the affect it might be having on his readers." What a wonderful thing to find after all these years! Also in there, a 1995 postcard from Dave Barry when I thanked him for the "eyes" of his audience that fell on something I wrote that was published next to his column.