William Johnston Braman died on May 2, 1955. I got to visit him in the hospital once, and according to my mother, I cried the whole time. I was, after all, less than one month old. With no memory of him, it may sound strange to say that I miss him, but I do. Not the sound of his voice, not the familiarity of his face, not the wonderful experiences we had together. No, I had none of those things. No, knowledge of him is based in some photos, some rare stories from relatives, my mother’s even rarer mentions of him, and a long, detailed ancestral history thanks to my cousin’s wife. I carry with me his DNA, and so do my children and grandchildren. We have all inherited his genetics, and whatever ways it manifests itself in our bodies.  My pointed nose, and a grandchild’s blue eyes may be his influence. And that leads to what I miss about him. I have the “nature” part of him in shaping me, but not the “nurture.”  That part of me formed completely without him, as happens to anyone who grew up without one or both biological parents.


Robert Allen Serjeant came into my life when I was two years old, and became my “Daddy” on April 12, 1958. I was so happy about this, that I announced, at the top of my lungs, “I have a Daddy now!” in the middle of a subway car. My “aunt,” who was taking care of me while the newly-weds honeymooned, felt the need to explain to a group of strangers about my father’s death and my mother’s remarriage. It was the 50s after all.


“Daddy” was the only father I knew, and his was the “nurture” role. Pretty soon he had two more little girls to raise. He wasn’t always easy to live with, sometimes meting out tough discipline. He was the source of an unpleasant nickname that still haunts me today. The older I got, the more we clashed. My mother’s alcoholism and his own problem drinking didn’t help any of us.  Yet, I never once felt that I wasn’t his daughter. Despite tempestuous times, I always went back to mend fences for the sake of “family.” And when grandchildren came into the picture, we saw a man softened by life whose strong hands were the only ones that could soothe those gassy babies. He and my mother died within months of each other when both were in their early 50s. It was a devastating loss – not the least of which was knowing that there were many things left unresolved. In the ensuing years, I have had more than one occasion to think, “Daddy would not have let this (whatever was happening to me) happen.” This was the “nurture” part of my life. A complicated, unresolved mix of experiences and feelings.  And another presence in my life gone too soon. He has missed a lot since then, and I miss him for that.


On Father’s Day, we reflect on what, or who, a father is and what they mean to us. It is a personal exploration, and no one can, or should, try to tell us how to feel. It has taken me many years to work through the legacies of my parents – all of them. And I have come to make peace with the fact that the Father and the Daddy that I had, shaped me into the person I am.  In loving myself, I love them and all that we pass down to the next generations, through both “nature” and “nurture.” Including how to say "Semper Fi" to the two Marines I lost too soon.

EDIT June 14, 2019
Had a good cry in the car this morning, as CBS-FM played Mike and the Mechanics' "In the Living Years." A song that goes right to the heart of what growing up in a dysfunctional family is like. And in the end, we grieve for what never was, and what will never be. 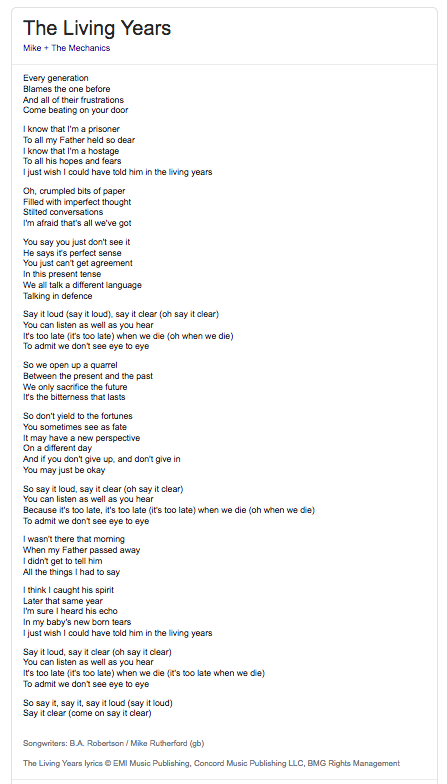