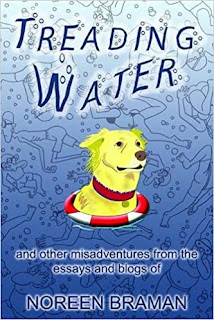 This week, I am dealing with a fairly serious flooding situation. It is nowhere near the experiences of some people in the Midwest recently, for that I am both grateful and saddened. I wish strength to everyone dealing with the damage done by the catastrophic flooding, tornadoes, and other disasters, and hope they get assistance from FEMA soon.

For me,  the situation is not that dire. But it is a continuation of what I'd like to call my "watery" adventures, and the reason for the title of my book "Treading Water." (Available here, and also on Amazon.) And yes, this is a shameful plug for that book, new sales of which might assist me with my less serious flooding situation. Below is a little tale that happened after the publication. And perhaps, once all the clean up and repairs are done for this recent "adventure" I will find a funny story in there somewhere.

Yesterday, an appliance malfunction reminded me that water-related events continue to haunt me. I thought I was safe when the 100-year flood in Jamesburg only brought water into my yard and right up to my deck, but not into my crawlspace or house. For the past several winters I have scrupulously avoided frozen, burst water pipes by always remembering to let the kitchen faucet trickle, just a tiny bit. And the Atlantic Ocean has allowed me to maintain my dignity by not knocking me down or removing my swimwear during my summer visits. But, the water may be still, but it is running deep. I have a toilet that refuses to be fixed, and will run water incessantly if not closely monitored. The way the little chain manages to knot itself up, despite numerous adjustments, points to more at work than faulty parts. Which brings me to this week's adventure, in which two elements conspired against me, water AND fire — or at least smoke.

In preparation for a seminar in NYC, I threw in a load of laundry that included just about every seminar-suitable piece of clothing I own. I also included the only jeans that fit me comfortably. Basically, I left out formal wear, outfits that require panty hose, and sweats. As the washer filled up, I filled the teakettle (with what else, water). When the teakettle whistled I came back into the kitchen and noticed an odd smell. The air seemed to have a lot of teakettle steam in it. As I poured the water into the teacup, I realized that the smell was more smoky than steamy, that it was getting worse and that the washer had stopped. As soon as I got near the washer, I realized the smoky stink was coming from it, and my first thought was that the motor was burning up. I tried to pull the washer out so I could pull the plug, but of course, true to the way my life goes, the washer was full of water. I turned it off, but the stink was growing and I expected to see flames behind the washer at any minute. A fireman's brigade was quickly formed to empty the water from the washer and dump it in the sink, using a bucket, a pot and some water bottles. My eyes burned and my throat hurt as we bailed and bailed until finally the washer was light enough to move. Thankfully, the plug was not hot, no wires were burning, at least on the outside of the washer. No flames were evident, and with no power, the washer cooled down. The smoky stink clung to everything in the house.

My mind flashed back to the apartment I lived in when I was 18. A basement apartment. An apartment that might not have been legal due to the insufficient plumbing. The way I learned about that was the day I came home to find sewer water spewing up out of my toilet and my kitchen sink. It was 4 inches deep in the kitchen. Luckily, at that time, I had a portable washer, and I spent a long evening with a bucket, dumping the water into the washer, and then putting the drain hose out the window to get rid of the fouls smelling stuff. I was able to break my lease shortly after that. Getting the smell out of my belongings took a lot longer.

Today, I hauled all the sopping wet clothes from this recent washer adventure outside and hung them to drip dry. I skipped the seminar (having nothing to wear) and began the "waiting for the repairman" ritual. While waiting, I counted all the pennies I could find to try and determine if I could replace the stackable washer and dryer if indeed the motor was fried.  It was looking more and more like I would be patronizing the disgusting, expensive laundromat in town.

I greeted the repairman like a teenager meeting a pop star, and hovered nearby as he began to take apart the washer. Taking off the cover let out a last gasp of choking stink, and we both coughed. The repairman did his thing while I tried not to overwhelm him with anxious questions. Finally, his head came out from under the washer. In his hand was what looked like a giant seal from a mason jar. It was black and crunchy. It was a "belt" and it had slipped out of wherever it was supposed to be, and it had burned the only way rubber knows how to burn — by stinking up the place. He replaced the belt, we ran the washer through its paces, and to my great relief, it worked fine! The specter of the laundromat faded from my brain. I could hear my checkbook actually sigh with relief.

Later, as I reloaded the washer with the original load of clothes, I thought, maybe the water stuck in the washer when it stopped wasn't again the universe's damp way of compounding a problem for me. Maybe the water was there to protect me, in case the overheated belt actually did start some flames. Maybe water is finally my friend. I may have to stop torturing it in the teakettle.
Posted by Noreen at 10:49 AM