Thinking of My High School Band Director on His Birthday 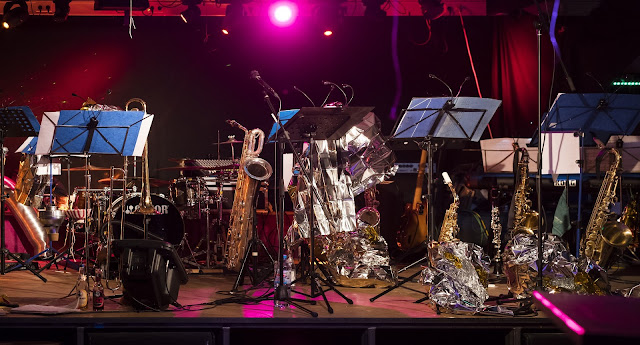 Born on the 4th of July, Mario DeCarolis would have been 95 years old today. He would be amazed to know his name and legacy live on in the students he mentored and taught, down to music students some of his students would teach, or those who still perform for fun or professionally. For me, I spent some time satisfying my desire to sing with years of community theater with my children, who all spent years celebrating music through dance. I now watch my grandchildren as their own interests develop, watching to see who has inherited a musical or performance gene.

As some of "Chic's" students remembered his birthday online, I pulled this story from my book. After his death, some of us got together and performed a memorial concert to start a scholarship fund in his name. I included this story in the program at that time, but just wanted to share it again, in his memory.


The old saying goes that if you save things long enough, sooner or later, they come back in style. I was reminded of this when my daughter showed me the hot new styles featured in her trendy magazine. There were the polyester shirts, hip hugger pants and platform shoes of the seventies. For a minute I was taken back to my teenage years. Back to the ‘70s when bell-bottoms couldn't be wide enough, hair couldn't be long enough, and everyone was rocking to the sounds of Glenn Miller, Tommy Dorsey and Benny Goodman.

The dance band was called The Indigos and it had been filling the high school band room for years with the sound of swing. It may have been too much sound for a bunch of high school kids, but we played anyway. And just when we were feeling like we had given Mood Indigo the definitive treatment, our director, Mario DeCarolis, would take out his old, shiny saxophone and wail. It was hard to not just stop playing and listen to him. He really knew those songs and played them with the feeling of a person who had lived through it.

Sooner or later it was my turn to climb out from under the baritone saxophone and step up to the microphone. The guys didn't like this part, they wanted to cut loose with In the Mood, or String of Pearls, and there I was ready to pour my 16-year-old heart into Sentimental Journey, or You Made Me Love You.

I tried not to antagonize the guys; after all, it didn't take much to drown me out. Worse than hitting a wrong note or forgetting the lyrics was knowing that all the audience got out of my performance was a look at a girl moving her lips to some old swing song. Sometimes they weren't shy about letting me know.

"Can't hear you!" somebody would shout. Turning up my amplifier usually produced some lovely feedback, and due to school budget cuts, I was sharing the amp with the electric guitar player who didn't mind being turned up at all. The result was a combination of Rosemary Clooney and Jimi Hendrix.

In addition to our unique sound, we were an interesting sight. Our white, wrap-around music stands were emblazoned with the band's logo, our instruments ranging from the brand new to battered school-owned relics. We learned the choreography, standing up, swaying and swinging our instruments. Well, they stood up. I never could lift that baritone off its stand.

Our dress code required that the guys wear jackets and ties with their bell-bottom pants. Sometimes the combination of plaid jackets, striped ties and fluorescent miniskirts was hard on the eyes. Other times it was the guitar player's long hair that drew stares. It appeared as if there had been a mix-up in the transporter room and a bunch of ‘70s hippies had been beamed down into a 1940s canteen. In fact, a similar incident actually happened on Star Trek and Leonard Nimoy's nephew did go to our school …

Not too long ago I heard some familiar music emanating from my daughter's room. It only took a few notes to tell me that she was playing In the Mood. In mid-song the tune changed to Pennsylvania 6-5000, then Little Brown Jug. What my daughter was playing was a cut from a CD by a group calling itself Jive Bunny and the MasterMixers.

It was a little disconcerting for my daughter to discover that her new hit record contained music not only remembered by her mother, but her grandmother also! Swing music really bounced back in a big way when The Brian Setzer Orchestra hit the charts with Jump Jive An’ Wail, and the tune was featured on a television commercial.

It was not a surprise for this graduate of the class of ‘73. After all, you keep things long enough, they come back. So I guess I’ll hang on to that last pair of bell-bottoms, my high school band jacket, some peace sign jewelry and my yearbook with Richard Nixon's picture on the inside cover. I'll dig out the old Blood, Sweat and Tears album and tuck it in the box alongside ones by Glenn Miller and Duke Ellington.

Then to complete this odd juxtaposition of eras, I'll throw in some photographs featuring the concert that Stan Kenton and his band played at my school. If you look real close, you can see that they are wearing bell-bottoms, too.


©Noreen Braman From “Treading Water”
Coming soon: a new edition of “Treading Water” with new essays, in honor of  2020 – The Year of Seeing Clearly. (A title selected way back in January – before 2020 revealed itself as The Never-Ending Year When Nothing is Clear)