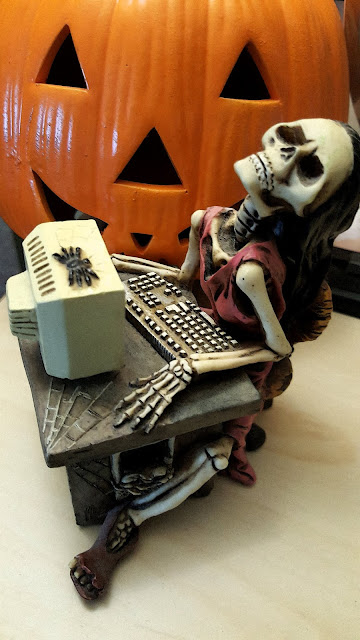 An excerpt from my Ha Ha Halloween podcast.

My affinity for the funny and whimsical side of Halloween goes back to my childhood. I never wanted to be a scary character, but something fun and fantastical. Even when I dressed as a witch, I was always a good witch. The year I was a flower girl for my uncle’s wedding, I wanted to go trick or treating as a bride, complete with a lacy white dress, a veil and bouquet. I had a bride outfit for my Barbie, with a pearl tiara and satin-lace trimmed dress and pictured being her twin. Shortly before Halloween my mother came home with my costume. This was, unfortunately, in the days of the plastic costume and mask in a box. She smiled, so proud of herself that she had actually found a Halloween bride-in-a-box costume.  But what I saw through the clear cellophane of the box top was not the fantasy Barbie bride of my dreams, but a bloody-faced mask, with a dirt and rip painted plastic evil Vampire Bride tunic. The story makes me smile today, but at the time, I was mortified, which is an appropriate mood for a vampire bride.

My children were influenced by my ha ha Halloween attitude, and preferred fun character costumes, hero and shero costumes, pirates, mermaids, WW I flying aces, and other creative themes. In fact, one year, my oldest daughter found my old suede bell bottom pants and a crocheted granny top, and decided to go as a hippy/flower child. She wore this outfit to the annual Halloween parade and costume contest at the Milltown, NJ Annual Legion. We all clapped when she was selected as a prize winner – but surprised when she was named Scariest Costume. As the legion member presented her with her award, he explained “We veterans of the 60s and 70s decided that hippies scared us!” Then he laughed. The kids were confused, but those of us of a certain age got his joke.

My son recalls a teen experience that happened on Mischief night – that night before Halloween that some tradition says that kids can get into “mischief” with no repercussions. Personally, I think it is a bad idea, and never knowingly allowed my kids out to participate. But, my son, somehow, that night was out on the street with his friends, and encountered local police officers. They were asked if they had eggs – the source of a lot of Mischief Night damage. The boys all denied having any eggs. The police officers then said, ok, so nothing in your pockets? And began tapping the boys pockets. There was the sound of eggs breaking. My son swears he only had “one egg” on him, and remains mad to this day. Me, picturing the boys with their egg-soggy pants can’t help but smile.

The mayor of Jamesburg, New Jersey where I live, shared a similar story with me Here is what she wrote me:

"My son and his friends were planning to go out on mischief night. This started when they were around 10-12 years old. I caught wind of their plan and so did another mom when we found stockpiles of toilet paper. I told them I would take them out but we could only use toilet paper and only our friend's houses.

So off we go just after dark. 4 boys and a mom. We do their own houses and other friends we knew wouldn't mind a little toilet paper. We pull on to a particular street, which was also a dead end. I turn my lights off and the boys get out and start running down the street. Next I hear the kids yell "COPS".  I SLINK down in my seat as he passes. The kids scatter and hide. All except my son. The officer calls his name as he stands there with toilet paper in hand. The officer knew my son and almost all the kids in town who went through his Dare program at school. He asks my son "does your mother know what you are doing?” He turns and points his finger and says, "ask her, she's right there!"

I try to sit up straight and not look guilty for contributing to the delinquency of a minor. The officer backs up and shakes his head, laughs and drives away. "

My sister Peggy remembers the time she made group costume for her daughters Becky and Jen, and my sister Theresa’s son Joey. She took a clear plastic bag, filled it with dry leaves and attached a hanging tag to it to create a giant teabag costume for Joey. Then, she made a teapot and teacup sandwich board type costume for the girls. The two younger kids were fine with it, but Becky absolutely did not like it. However they won best group costume at another Milltown American Legion Halloween Parade. I’m guessing the award was some consolation for being a Tea Party member long before the Tea Party movement actually became a “thing.”

Fellow Laughter Professional, Miriam Gassman, recalled her before-punk-hair-gel days idea to make her hair stick straight up on Halloween. For some reason she thought that slathering her hair with Vaseline would do the trick. Well, not only did that not work, but she was forced to go to high school for the next week with greasy hair that took several days of washing to fix. Any teen will tell you, that is a really horror story!

Halloween was not so fun the year Hurricane Sandy blasted New Jersey and so many people were without power and just trying to assess property damages. Governor Christie even signed an executive order to move the date of trick or treating. It was the second year in a row that NJ kids had weather almost destroy Halloween. The previous year, a freak, heavy wet snowstorm played havoc with the celebrations. But, out of these two years of more tricks than treats, came a surge in popularity of  “trunk or treat,” a kind of tailgate Halloween party, held in school and mall parking lots. People load their car trunks with treats and decorations, and the kids make the rounds. Now that is how to keep the HA HA in Halloween!