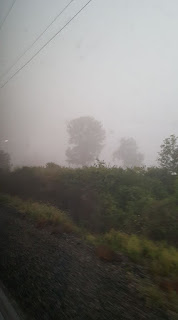 Good morning Ohio! It was an interesting night aboard the Lake Shore Limited. I had a reservation for dinner at 8:15 and arrived at the dining car to find there were no seats available. Those of us who had reservations were asked to stand in the “vestibule” of the train to wait for seating. The “vestibule” is a fancy word for that no man’s land between train cars. Feeling uncomfortable and usafe, we decided to wait in the car immediately in front of the dining car instead. We heard someone say that the dining car closed at 9, and I said, half-jokingly “I hope we don’t stand here until 9 and then get told it’s closed.” This infuriated someone behind me in line so much that she went back into the dining car and complained enough that she was given immediate seating. That didn’t sit well with those of us left out in the vestibule who were ahead of her in the line.

Eventually I was seated, joining a dad and his son at a table where they were already eating. The fun discussion with young Nick about his trip to New York City was thoroughly delightful. We talked about the statue of Balto in Central Park, dinosaurs, animal rescue and dogs. It was the highlight of the evening. 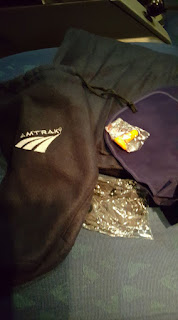 I then returned to my seat to settle in for the night. I had purchased a comfort kit for $10, which included a blanket, blow up neck pillow, earplugs and an eye mask. I noticed that more experienced travelers had brought full size pillows and blankets with them. Good thing to remember next time around.

The seat has plenty of leg room, and there is a foot rest that comes up. Too bad there are not instructions at the seat to show you how to operate it. Eventually, I stopped fooling around with the stick-shift-looking knob and just pulled it up by hand.

The car was quiet, but for those who need complete dark to sleep, I highly recommend the eye mask, as the center row of light on the ceiling stay on. Bringing your own blanket is a good idea also, as the Amtrak blanket is way too small, and the car gets really chilly. I was glad to have an empty seat next to me so I could eventually curl up across the two seats. For some reason, my legs were just restless and I had a hard time getting comfortable. 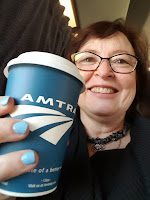 I apologize to my fellow passengers who were serenaded to “Baby Shark” at 7:15 am. I forgot to turn off my workday wake up alarm. I turned it off pretty quickly. A few minutes later, though, everyone forgot about my alarm when a the “Dining Car Open for Breakfast” announcement blasted over the PA system. Apparently there are only two settings on that system — earsplitting and unintelligible.

The train seemed to stop on the tracks several times during the night —and this morning we were crawling along at a snail’s pace for quite some time. We are finally zipping past foggy fields of corn and other crops as the sun tries to break through. I’ve got my coffee and a protein bar and the internet came up and allowed me to post my first two dispatches.
Even with some of the glitches, this has been a fun experience. Good thing, because I have to do it again for my return trip.